The Livingston dojo was established in 2015 and provides an exciting environment for Students to train. We are affiliated with Aikido Schools of Ueshiba, under the direction of Mitsugi Saotome and is officially recognized by the International Aikikai (Hombu dojo).   Saotome Sensei is a renowned instructor of Aikido and has the distinction of being the longest tenured student (15 years) of the Founder (Morihei Ueshiba). 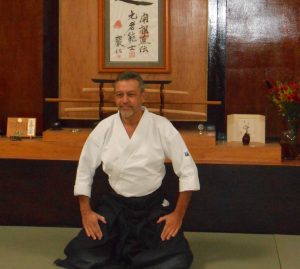 Tony Blomert is the chief instructor at the Livingston, MT dojo.  He has nearly 40 years experience training in the martial arts and Aikido.  He is a well-known authority having been the publisher of “The Aikidoka’s World” blog from 2010 – 2013 and An Open Secret – A Student’s Handbook for Learning Aikido Techniques of Self-Defense and the Aiki Way in 2014.  The later is an Amazon “Best Seller.”

He began instructing in 1975 while a student of Shinshin Toitsu Aikido  (known as Ki Aikido). He has also studied Judo and Daitoryu JuJitsu which is one of the historical foundations of Aikido. Blomert Sensei relocated to Southern Nevada in 1989 to follow business opportunities in the construction industry.  He became a member of the Aikido Schools of Ueshiba (ASU) under Shidokan Dojo Head Instructor, James Sterling.  He moved to Montana, in 2013 and is presently ranked Sandan (3rd dan).

We are located in the Plaza Building, 1313 W Park St. Livingston MT 59047.  Our entrance is on the W. Geyser parking lot of the complex next door to the Montana State Driver Services Bureau. Training classes for children (ages 6 – 12), teens and adults; as well as, an 6 -week summer Aiki Kids program are offered at the Livingston location.

$75 per month all levels Youth